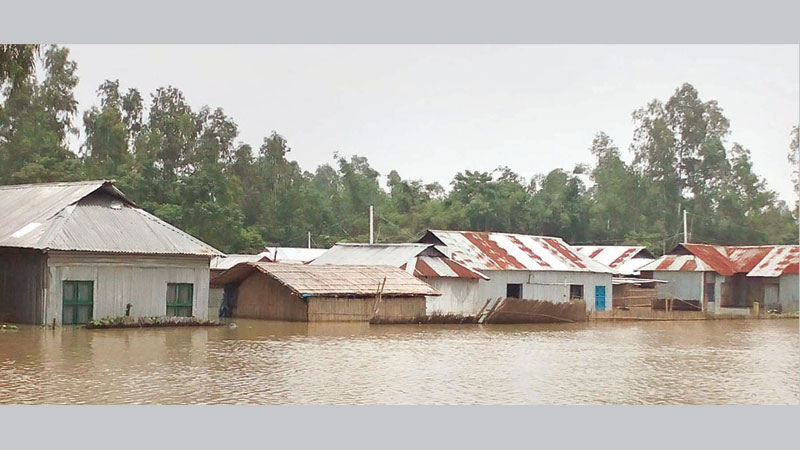 Bangladesh lies downstream of the Ganges, Brahmaputra and Meghna river basins. So, floods visit the delta nation every year. They usually come from March to August and cause huge losses. With the advent of monsoon, people living in the flood-prone districts of the country are already taking preparations to minimise losses from this natural disaster.

This week, The Weekend Independent talks to environment experts, government agencies and humanitarian organisations regarding ongoing activities and programmes to forecast floods and take preventive measures to reduce loss of life and property.

Bangladesh Water Development Board (BWDB) provides hydrological services, including flood forecasting and warning information, to develop disaster management capacity of national agencies and communities through the Flood Forecasting and Warning Centre (FFWC). To undertake disaster preparedness programmes in advance, flood forecasting and warning play a vital role in mitigating flood damages. Since its establishment in 1972, FFWC has been providing advance data for upcoming floods to help people and different disaster management agencies take immediate action for safety and security.

According to M Arifuzzaman Bhuyan, executive engineer of FFWC, there are four types of flooding in our country, and they include monsoon river flood, flash flood, local rainfall flood and storm surge flood. Monsoon river floods, which are caused mainly by overflowing rivers, come each year.

“Monsoon floods account for 20 to 25 percent of all other types of floods. Flash floods usually come during the pre-monsoon season, from March 15 to April 15. Flash flood zones are in the north-east and south-east, as well as haor (wetland) areas, including Sunamganj, Sylhet, Moulvibazar and Habiganj, which cause huge losses to paddy cultivation. So, it is important to make proper forecasts to save lives and properties,” Bhuyan said.

This monsoon season, mentionable flood-prone areas are Birol upazila in Dinajpur and Sariakandi in Bogura, said M Mizanur Rahman, assistant director of BDRCS who is now in charge of its flood response team.

Nurul Amin, assistant director, disaster response department of BDRCS, who is now monitoring the pre-flood preparedness programme at Birol upazila, told this correspondent over the telephone: “Access to potable water becomes an important issue for flood-affected people. So, we have set up 24 water purification kits in 13 places. Each kit can purify 1,000 litres of water.”

“We have listed about 6,000 families in Sirajganj, Kurigram and Dinajpur districts. We will give Tk 4,000 to each family. We will also distribute eight types of vegetable seeds and hygiene kits, which include some essential non-food items,” Amin added regarding their pre-flood activities.

Explaining the reasons for the annual floods, Bhuyan said: “Flash floods occur only in the north-eastern part of the country in the pre- to post-monsoon period, triggered by intense rainfall in the Meghalaya Hills, and in parts of eastern Bangladesh post-monsoon. Local rainfall floods are caused by localised heavy rainfall. Storm surge floods are a coastal phenomenon, brought on by cyclones hitting the southern coastline.”

Regarding data collection for flood forecasting and warning activities, the executive engineer of FFWC said: “Now, we can forecast floods five days ahead of the incident. A geographic information system (GIS) module has been added to our flood forecasting and we use numerical weather prediction models provided by Bangladesh Meteorological Department and Indian Meteorological Department. We also use satellite-based observation data and a weather research forecast (WRF) model.”

“We remain operative from March to October. (The rest of the year, we do regular office work.) During this period, our field-level hydrological measurement division works closely with us to provide observed data. For that, our centre remains open 24 hours a day, 7 days a week,” Bhuyan continued. “The water level is measured by 60 rain gauges and 90 hydrological stations. They observe real-time water level and rainfall data. Water level and rain gauge readers from every station send us data twice a day,” he added.

About coastal flood forecasting, Bhuyan said: “Due to climate change, coastal floods are now a regular occurrence in our country. Besides, astronomical high tides and tropical cyclones are also responsible for this type of flooding and that happens on a regular basis. But it is good news that BWDB has now constructed embankments in some coastal areas to protect from floods.”

Regarding dissemination of flood warnings, Sarder Udoy Raihan, sub-divisional engineer of FFWC, said: “We give out forecast data every day, and we can forecast floods five days ahead. We are the only assigned government body to forecast and give warning on floods. So, our data is urgent and users can get the information through various means, including email, internet, fax, telephone, mobile SMS, etc.  We upload flood forecast information daily on our website, www.ffwc.gov.bd. Besides, anyone can get flood forecasting information by dialling 1090 (press 5) free of cost.” FFWC, located on the 8th floor of WAPDA Building at Motijheel in the capital, works as an auxiliary organisation of BWDB under the Ministry of Disaster Management and Relief.

Regarding initiatives to aid flood victims, M Yusuf Ali, project director, flood asylum centre of Department of Disaster Management, said: “We constructed 100 flood shelters in 43 flood-prone districts in 2017, and 64 shelters in 27 flood areas in 2015. Our centres can be used for different activities during the dry season. We provide every support to flood victims with the help of various disaster management agencies.”

Ensuring smoothness of the flow of rivers inside our country is urgent, experts say. Water Resources Planning Organisation (WARPO), a government agency for water resources planning, is working for implementation of Bangladesh Water Act 2013, which makes provisions for integrated development, management and conservation of our water resources. SM Feroz Alam, director general of WARPO, said: “We are now working with the Water Act. We have already held meetings with local administrations in flood-prone districts and collected recommendations from them. We have submitted our report to the relevant authorities. We hope we will get a fruitful outcome soon.”

Meanwhile, Bangladesh Red Crescent Society has many projects for flood affected people. It has been working with local government bodies to provide information and services for many years. Belal Hossain, director, risk management department of BDRCS, said: “We do three types of activities _ before the flood, during the flood and post flood. We have some long-term projects, like establishing shelters, providing livelihood training and others. We also provide assistance to displaced people to go to safer places during floods. We help identify the number of affected people and missing persons and estimate losses. We also provide timely emergency relief.”

About other flood-related activities, Nazmul Azam Khan, director, disaster response and communication department of BDRCS, said: “We have Urban Disaster Risk Reduction (UDRR) programme, which was initiated in 2012 with the goal of reducing risks among urban vulnerable communities by enhancing their preparedness and response capacity. We also have Vulnerability to Resilience (V2R) project, which gives special attention to the social needs and safety of highly vulnerable people, including women, children, the elderly and persons with disabilities.”

“As local people are the first responders, we have Unit Disaster Response Team (UDRT) members who can respond to any disaster in an efficient way. We also have well-trained volunteer groups, named National Disaster Response Team (NDRT), in respective districts. We deploy them in flood-hit areas. They distribute oral saline, cooked food, dry foods, tarpaulin sheets, water purification tablets and other necessary items among flood-affected people,” Khan added.

“We reunite scattered families, provide tin sheets for rebuilding houses and set up sanitary toilets in flooded areas. We also give livelihood support and arrange different types of training for flood-affected people. We also distribute leaflets for creating awareness about health and sanitation,” Khan continued.

“We also request the International Federation of Red Cross and Red Crescent Societies to start an emergency fund for disaster relief to help the affected people in flood-hit districts. Mobile phone companies, owners of garments factories and other industries also help us to raise funds. The amount of money raised is based on the overall damage done in the flooded area. Based on local needs and availability of funds, we give monetary help to the flood victims. Last year, we disbursed Tk 5,000 to Tk 10,000 to each affected family,” he added.

BDRCS does its fieldwork based on information from FFWC, Khan said. “As soon as we get any forecasting data on floods, we remain well alert in every one of our centres,” he added.

Flood is a part of nature in our country. So, we cannot ignore this natural disaster. Now, about 70 to 80 percent of damages from floods are being prevented through constructing infrastructure, like flood protection embankments and polders, said  Ainun Nishat, professor emeritus of BRAC University and a leading water resource  expert of the country.

“A large number of people are living in flood-prone areas in this country. We cannot escape from this disaster, or move such a large population to flood-safe areas permanently. So, we have to take up some preparedness programmes to mitigate losses,” Nishat said.

“At present, many effective initiatives, including construction of embankments, an accurate flood forecasting system, flood shelters and building capacity among the affected people, have been taken by the government. So, the capacity of facing floods is increasing now,” the professor added.

M Shahaduzzaman, agriculture officer of flood-prone Sariakandi upazila, said: “Floods generally come to our area in June and July and damage crops. So, we recommend to farmers in the seven unions of our upazila to cultivate BIRI-51 and BINA-11 (special varieties of paddy that can grow in deep water) in shallow fields. Besides, we provide information on growing other crops in the low-lying areas. Every year, the government arranges rehabilitation programmes and provides relief to the most vulnerable people after the floods.” n