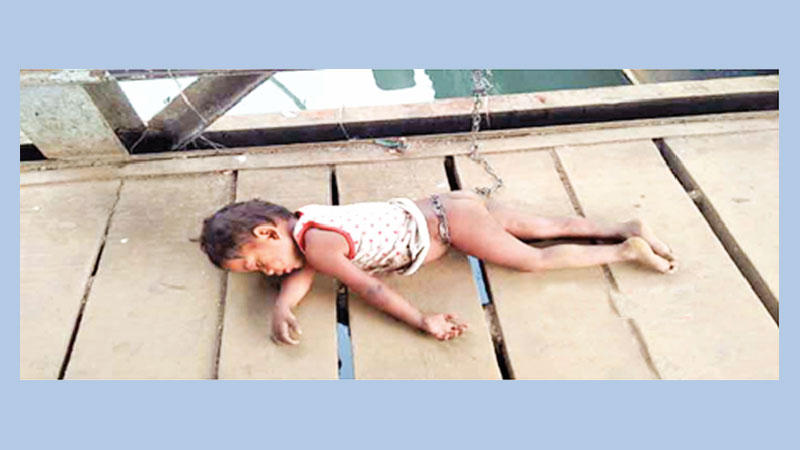 Mother goes to work keeping the child locked in chain. The Image tells the challenges a working mother facing in daily life. Such situation brings in the urgency of setting up day care centres across communities

The train of this globalised world is moving fast, hence maintaining the traditional social norms and practices has become tougher for people across communities irrespective of developed or undeveloped, literate or illiterate and rich or poor. Across societies, children become the worst victims of such erosions in the social norms, traditional family structure in particular and social practices in general. In order to keep pace with the changes in the socio-economic phenomenon, parents work outside their homes leaving fate of the children to the informal caregivers for the entire day. These caregivers in most of the cases are not only unskilled but also ignorant of the basic requirements of the children. The affluent families can afford caregivers for their children albeit lacking the standard skills, but the children from the poorest families stay unattended – the whole day as their parents go out for rickshaw pulling, domestic helping, or other forms of day labour. Study shows that such realities expose the children especially those who are under the age five to different unsafe circumstances and injuries including drowning.

Child care, also known as day-care, is the care and supervision of a child or multiple children at a time of the age group from six weeks up to eight years. Child care means skilled rearing of the children by a day-care centre, babysitter, teachers, or any other care providers. Additionally, child care is a broad issue covering a wide array of professionals, institutions, contexts, activities, social and cultural conventions. Early child care is even more important and an often-overlooked component of child development especially in the context of Bangladesh. Child care providers can be children's first teachers, and therefore, play an integral role in the early childhood development system.

Early Child Care and Development (ECCD) has been recognised across the globe as a comprehensive approach to develop the fullest cognitive, emotional, social and physical potentials of children from birth to five years. Likewise, in Bangladesh ECCD has been recognised by the government through the ratification of the Convention of Child Rights followed by the signing of the World Declaration on Education for All in 1990 and the Dakar Framework for Action 2000, which had emphasised the importance of early childhood years as a means to achieve education for all. Steered from the highest policy level and orchestrated by the leading NGOs, the ECCD – albeit regarded as a new concept in its early stage of development – opportunities for early childhood education has now been flourished although in unstructured and informal manner. The NGO-driven innovative initiatives promoting ECCD have been broadly steered by the community based approaches in which parents played the key role while the community as supportive or facilitator.

The Education Watch Report 2013 revealed, “When the primary school children brought their younger siblings with them to schools as part of their traditional role of caregivers, teachers had faced the challenge of accommodating the additional children in the classrooms. Fortunately though, instead of turning away, in many cases they were allowed to sit in separate classrooms or in the courtyards. This resulted in the emergence of baby class in its earliest form. The schools started baby classes as a sporadic and temporary endeavour. However, it sets into a motion, a demand for education facilities for younger children. Such a general demand and institutionalisation of baby class became an important milestone in the introduction of pre-primary education in Bangladesh, and in subsequent policy deliberations as well as policy formulation related to early childhood education in the later years.”

Bangladesh has been on track towards achieving the targets of the global goals but few exceptions. Especially in the health sector though major advancements have been made so far, drowning has been found as the dominating factor affecting the mortality rate of children below five years. Bangladesh Health and Injury Survey 2016 estimated that the drowning mortality rate of 11.7 per 100,000 persons per year corresponds to a total of 19,247 deaths per year, two-thirds of whom are children. Centre for Injury Prevention and Research, Bangladesh (CIPRB) study shows that 68% of drowning takes place between 9 am and 1 pm and the majority of incidents take place in ponds (66%) and ditches (16%) located around forty steps of households. This has been accelerated by the reality that both parents in poorer households most often have to work in distant places leaving children unattended. To tackle the drowning epidemic among other interventions, CIPRB has set up Anchal an alternate form of child care, which provides appropriate supervision for young children in a safe environment outside their normal homes in different parts of Bangladesh where children are mostly exposed to the risk of drowning. Such Anchal centres are similar to day care centres, where children can be dropped at the start of a work day and retrieved later when the parents are done with their work schedule. These centres, designed and adapted to function in the realities of rural Bangladesh, not in an office or industrial complex, are managed by the communities and supported by CIPRB. The organisation has fixed the duration of Anchal centres based on the evidences from research when around 60% of child drowning takes place in Bangladesh. However, the duration of the day care centres run by other government and non-government agencies varies depending on the client’s need and other ground realities.

In the 2030 Agenda for Sustainable Development, the General Assembly of the United Nations under SDG 4.2  resolved to ensure that “all girls and boys have access to quality early childhood development, care and pre-primary education so that they are ready for primary education” that leading to developing strategy and action for advancing comprehensive early childhood development. In the process drowning prevention intervention Anchal contribute to achieve the overarching goals having indirect contributions of achieving other global goals as well. Such developments taken together, over the years non-government initiatives got structured and led the countrywide network of NGOs under the umbrella of Bangladesh Early Childhood Development Network (BEN), where contributions of NGOs, INGOs and UN agencies are enormous in the progress of the movement, which has organised the two day conference during 6-7 November 2019. The conference with the theme “Lending momentum to holistic early childhood development across sectors” designed in the perspective of SDGs and nurturing care framework aimed at upholding the key policies and strategic concerns around ECD. Government of Bangladesh has been seamlessly providing policy support, and eventually has formulated the Comprehensive Early Childhood Care and Development (ECCD) Policy 2013. Government’s firm commitment in attaining the standards of early childhood development has been echoed in the recent move of framing legislation toward institutionalisation of day-care facilities for children by initiating to enact Day-Care Centre Act 2018. The rationale statement of integrating Anchal into the broader discussion of early childhood development approaches lies in the fact that Anchal also deals with children aged 9 – 59 months who are the ultimate target group of every childhood development interventions. CIPRB evidences show that children attending Anchal are better performer in the primary school with compared to those who did not receive any ECD stimulations. It’s worth mentioning that close supervision through Anchal child drowning can be reduced by 80%.

Thus it is imperative to include drowning prevention intervention of Anchal, into greater discourse of ECD, which has proven track record of applying early childhood stimulations among the children exposed to drowning. The proposed Day-Care Centre Act 2018 apprehends that almost all the technical aspects of early childhood development that are to be addressed have been referred to the formulation of the rules after the enactment of the Act. If so is the case, it is imperative to further the consultations of all the stakeholders so as to enable a comprehensive rule for the proposed Act to ensure its effective & efficient implementation once enacted. Given the reality of addressing the drowning epidemic through setting up Anchal in rural context the scope of the proposed Day Care Centre (draft) Act 2018 needs to be broadened along the following areas of improvement among others:

*   Inclusion of father and guardian under the definition section along with mother and creating provisions for mothers engaged in non-monetary or household activities;

*    Consideration of age group of children that enables inclusion of children aged 1-8 under Section 1 of Clause 2 following the Comprehensive ECCD Policy 2013;

*    Introduction of provisions for Grievance Management System at all levels;

*   Introducing provision of interim registration at least for one year under Clause 5 by relaxing the mandatory provision of licensing at the beginning;

*   Widening the criterion of Day Care Centres under Clause 7 by introducing provision(s) for establishing Day Care Centre on non-profit basis by public, private or corporate;

*    Making the locally elected representatives viz. Ward Commissioner of City Corporations and Chairman of Union Parishad accountable to certify and authenticate the eligibility and capacity of the service provider of running the Day Care Centre.