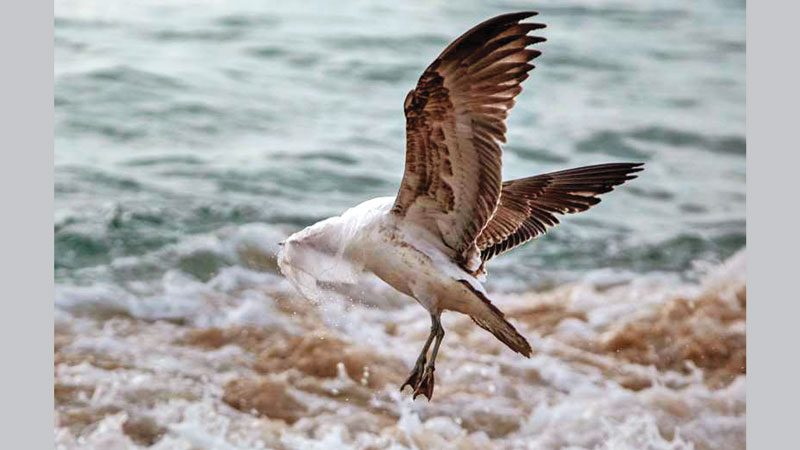 Adam Feinberg had no sooner made a bright yellow thin sheet of plastic than he had to shred it into little pieces. He chose an ‘I’-shaped mould for the logo of the University of Illinois at Urbana-Champaign where he is a chemist. Then, he filled it with the plastic bits and stuck it in a hot oven. “I opened up the mould and there was this beautiful yellow ‘I’,” he recalls. His new plastic passed the first test — it was mouldable with heat like regular plastic. But there was another important step left in rethinking the world of durable plastics.

Feinberg placed the ‘I’ under a white light, and five minutes later, only half of it remained. The other half had fallen on the ground. Pieced back together, the ‘I’ had a hole in the middle and in its place was yellow goo.

The plastic did not simply melt. Its building blocks, the synthetic polymers within, had reverted to their molecular units. “It was a phenomenal feeling,” he said of the successful experiment.

Most synthetic polymers _ long chains of many identical molecules _ were not designed to disintegrate or disappear. On the contrary, they were meant to last as long as possible once they began replacing metals and glass in long-lasting things like automobiles and airplanes.

But synthetic polymers became so popular and adaptable that decades later, they’re at the root of the global burden of billions of tons of plastic waste. The latest villains in environmental campaigns are disposable plastic products formed from synthetic polymers — straws, cigarette filters, coffee cup lids, etc. Over the past few decades, this mismatch between material and product life span has built up plastic waste in landfills and natural environments, some drifting in oceans until mounds and mounds have reached the ends of the world and bits have been ingested by marine life. Too little gets recycled; in fact some estimates indicate that a mere 10 percent of all plastics are recycled every year.

The environmental effects of plastic buildup and the declining popularity of plastics have helped to spur chemists on a quest to make new materials with two conflicting requirements: They must be durable, but degradable on command. In short, scientists are in search of polymers or plastics with a built-in self-destruct mechanism.

“It’s two diametrically opposed criteria that we’re trying to juggle,” Feinberg said. It’s easier to mould a robust plastic without destroying it, he says, but at the same time, it should not last forever.

“The real trick is to make them stable when you’re using them, and unstable when you don’t want to use them,” says Marc Hillmyer, who leads the Center for Sustainable Polymers at the University of Minnesota.

While not a silver bullet for the problem of plastic waste, self-destructing plastics could also enable new applications in drug delivery, self-healing materials and even some electronics.

The starting point requires picking polymers that are inherently unstable, and often historically overlooked because of their fragility. Given a choice, their units would rather stay as small molecules. What scientists do is force those molecules to link up into long chains, and then trap the resulting polymers.

Dismantling these polymers is sometimes called unzipping them, because once the polymers encounter a trigger that removes those traps, their units fall off one after another until the polymers have completely switched back to small molecules.

“As soon as you start the process,” explains Jeffrey Moore, Feinberg’s supervisor at the University of Illinois, “they just keep going.”

Feinberg’s polymers were imprisoned in circular loops instead of being open-ended chains. By themselves, the loops were stable. For the self-destructing plastic, Feinberg mixed the polymers with a little bit of yellow, light-sensitive dye. When light shines on the plastic, the energized dye molecules rip electrons out from the polymers. The loops break, exposing the polymer ends, and the polymers unzip.

Other scientists trap their polymers by capping the ends of the long chains or linking the chains together into networks. By designing these traps to fail upon meeting certain triggers like light or acid, scientists can control exactly how and when their polymers unzip.

“We can have a big change in properties or complete degradation of the polymer just from one event,” says Elizabeth Gillies, a polymer chemist at Western University in London, Ontario. On-demand, rapid disintegration gives unzipping polymers an edge over biodegradable ones, she says, as biodegradation is often slow and difficult to control.

In theory, these next-generation polymers could help mitigate pollution problems associated with plastic products. If the units were collected after unzipping to make new polymers, that would lead to chemical recycling. Most recycling done today simply involves melting the plastic and remoulding it.

Instead, scientists like Hillmyer are focusing their attention on higher-value materials like the polyurethane foams commonly found in mattresses and car seats. In 2016, Hillmyer and his team made a polyurethane from unzipping polymers that was chemically recyclable. Molecular units derived from sugar linked up to make the polymers, which then cross-linked into polyurethane networks. The foam remains stable at room temperature but unzips into units if heated above 204.44 degrees Celsius.

Unzipping polymers could also produce adhesives that can be turned off. That would help separate complex objects and materials like toys or Formica surfaces into their individual components for recycling. “We do a terrible job of recycling laminates, composites and even electronics,” says Scott Phillips, a polymer chemist at Boise State University.

Phillips and Hyungwoo Kim, now at Chonnam National University in South Korea, introduced a tiny amount of unzipping polymer into a common, cheap polymer. By themselves, neither polymer is sticky. But when mixed, they cross-link into networks, turning into a sticky, grey goo. To turn the adhesive off, Phillips and Kim applied fluoride to the edges of two microscopic glass slides stuck together, and the glass slides fell apart within minutes.

Having unzipping polymers and fully recyclable products is a step forward, but consumers still have to do their recycling right. The key, says Ramani Narayan, a polymer chemist at Michigan State University, is to have clear, well-defined disposal environments for any object that’s reached its end-of-life.

Arguably, he says, biodegradable plastics also have a self-destruct mechanism, provided they end up in the right place with the right microbes. But they’ve suffered from years of false advertising and consumer confusion. For that, Narayan is leading a push toward compostable plastics, starting with disposable utensils and food packaging. Compost could divert not only single-use plastics associated with food, but also food waste. “By using the word ‘compostable,’ it defines the environment,” he says, and that, for consumers trying to pick the right bin, is “critical.”

Beyond recycling, unzipping polymers can enable new applications ranging from drug delivery to materials that automatically heal themselves, Moore said.

While self-destructing biomedical implants or electronics are still far-off into the future, scientists like Gillies are making smart packaging from unzipping polymers. Not to carry groceries, but for payloads like cancer drugs that could be released in tumours or fertilizer only when needed in fields.

For these applications, the units must be safe and benign. A potential candidate is glyoxylate, says Gillies, which is a molecule that occurs naturally in soil microorganisms. Gillies’ team made unzipping polymers from glyoxylate units and put different caps on them so that they could be deployed in many different scenarios.

“We have a universal backbone and we can just change the end cap to make it responsive to different things,” says Gillies, like light in the fields or a low oxygen environment in tumours.

For Moore, the goal is to make materials that can heal themselves. “We want our materials to be able to recover from damage and maintain performance over long periods of time,” he says.

Moore envisions filling tiny capsules made from unzipping polymers with healing agents and then embedding the capsules in coatings. Perhaps they respond to light, he says, so that when a cell phone’s coating cracks, for example, the light that penetrates will trigger capsule degradation. Those healing agents then spill out to fill the cracks. Then, the coating will automatically be good as new, reducing the need to get a new device.

While waiting for these next-generation polymers to appear, current commercial plastics are still being pumped out on the scale of 400 million metric tons a year. And those plastics were intended to be as strong, as robust and to last as long as possible. n