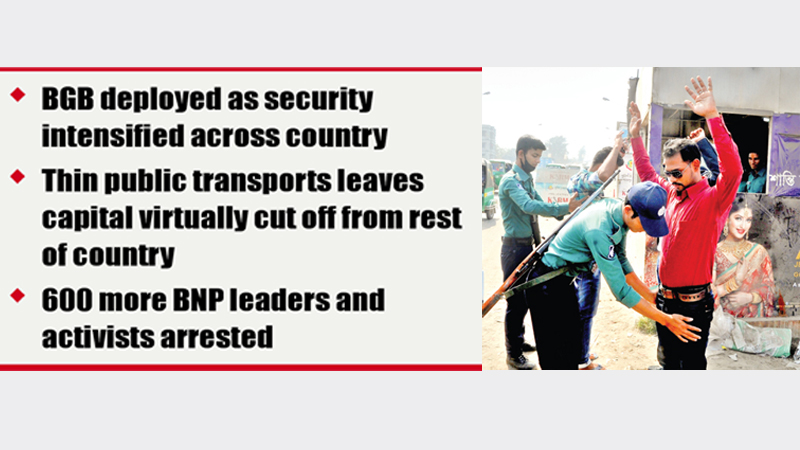 Policemen conduct searches over the bodies of commuters and in the vehicles heading towards the capital at the Postogola Bridge area yesterday. Independent Photo

Authorities have beefed up security in and around Dhaka city, fearing a possible outbreak of violence once the verdict in the graft case against BNP chairperson Khaleda Zia is delivered today.

The BNP has threatened to take to the streets if the verdict goes against Khaleda. The Awami League (AL) has asked its supporters to be alert.

A posse of policemen, both in uniform and in plainclothes, have taken up position around the BNP office. Border Guards Bangladesh (BGB), Rapid Action Battalion (RAB), city police, as well as other law enforcement forces have been deployed across the city.

Instead of the usual 8,000, around 35,000 policemen have been on active duty in Dhaka since yesterday, said Dhaka Metropolitan Police (DMP) sources.

BGB information officer Mohsin Reza said: “Sixty-nine platoons of BGB have been deployed across the country to maintain law and order at the request of the administration. Of them, 20 platoons have been deployed in the capital alone. They will continue to perform their duties until further order.”

Apart from Dhaka, the government has deployed the BGB in Chittagong, Rajshahi, Khulna, Sirajganj, Bogra, Narayanganj, Noakhali, Lakhipur, and Chandpur at the request of the respective district administrations. Three platoons of BGB have been deployed in Sirajganj, three in Bogra, three in Narayanganj, and one each in Noakhali, Lakhipur, and Chandpur, said Reza.

The capital has been virtually cut off from the rest of the country by ‘thinning public transport’ and conducting searches in messes and hotels. Besides, security has been stepped up in entry points like Uttara, where the highway to Tangail, Gazipur, and Mymensingh ends, and in Demra, which is connected to Chittagong and Sylhet.

The number of buses coming to the city from the other districts has dropped considerably since yesterday. Some of the bus operators said they would keep their services shut until today to keep the BNP and its allies outside the capital.

People are likely to face hassles, if public transports are scanty in numbers on the roads in the capital, as Pathao ride services will also remain temporarily unavailable from 6am on Today.

A message sent by Pathao yesterday said it will inform all when the service returns to normal. Sources at the Bangladesh Inland Water Transport Authority (BIWTA) and the Bangladesh Inland Water Transport Corporation (BIWTC) said a large number policemen have been deployed at all the ferry and launch terminals to deter BNP supporters from  entering Dhaka. Law enforcers have set up security and surveillance checkpoints at 13 entry points of Dhaka since Tuesday night to prevent the entry of criminals, explosives, and weapons. The DMP has set up CCTV cameras at Tongi, Aminbazar, Jatrabari, Kuril Biswa Road, and Postagola. Intelligence agencies are working alongside the police.

Law enforcers were found stepping up security measures in and around the court of Dhaka’s special court-5 at the Alia Madrasa ground in Bakshibazar yesterday. This court has heard the graft case against Khaleda filed by the Anti-Corruption Commission and will deliver the sentence today.

Several police units, including the Detective Branch and the RAB, were seen monitoring the security measures around the court premises. “We have intensified patrols and security searches in the whole area around the court,” said Masud rana, assistant superintendent of RAB-10.

Over 600 BNP leaders and activists, including former Gazipur BNP lawmaker Hasan Uddin Sarker, were arrested in the last 24 hours ending yesterday evening, according to police and BNP insiders.

BNP, however, claimed that police arrested around 3,500 of its leaders and activists across the country over the last few days.

"At least our party's 3,500 leaders and activists have so far been arrested centring a court verdict in a false case against our chairperson. We're doing politics in such an anarchic situation," said BNP Senior Joint Secretary General Ruhul Kabir Rizvi.

Later in the day, Rizvi also issued a statement saying his sign has been forged by a quarter to circulate a fake press release of Khaleda Zia on social media and that the BNP has no involvement with the release.

However, Home Minister Asaduzzaman Khan and Inspector General of Police (IGP) Javed Patwari have denied BNP allegation of mass arrest of its activists.

IGP claimed that only 59 people were arrested on an average this week. He also brushed aside the claim of BNP for mass arrest.

Chittagong braces for verdict: The Chittagong Metropolitan Police (CMP) has also intensified security measures in the city ahead of the verdict in the Zia Orphanage Trust graft case.

In special drives across the city and the district, the police have nabbed at least 200 leaders and activists of the BNP and its various wings. While the CMP said they have detained 75 people, the district police said they nabbed 122 people in an overnight drive on Tuesday.

CMP commissioner Iqbal Bahar said: “No one will be spared if they take part in any subversive activity. We will do everything to ensure the security of the public and their property. No mass-arrests are being made. Only suspicious people are being detained to thwart possible subversive activities.”

“Sixteen police checkpoints have been set up in the city and its entry points. An additional 3,000 policemen have joined the existing force to tackle the situation,” he added.

The CMP has clamped a ban on processions and on entering the city with sharp weapons, explosives, and inflammable materials today. They are also conducting special drives and  searching all vehicles, both public and private.

The movement of public transport has been stopped on the road from Cement Crossing to No.11 Patenga Ghat (Marine Academy) from 4 pm yesterday to 10 am today, as several KPIs are located in the area. However, vehicles carrying law enforcers, Army, Navy, and Air Force personnel, and staff buses of the offices located in the area will remain out of the purview of the ban.

The district police have also taken special security measures. “We have deployed special forces. All the officers will be on the field. We have the list of the people who were involved in subversive activists in 2012 or before that. We are detaining them,” said Nur-e-Alam Mina, the superintendent of police, Chittagong district.

He asked people not to panic over the verdict. “We are not arresting innocent people. This is not a mass arrest,” he clarified.

Security measures in Khulna, Sylhet, Rajshahi, and other parts of the country have also been beefed up.

Rajshahi tense: Chances of violent confrontations have risen sharply as the BNP and the AL gear up to show off their political might in response to the verdict in the corruption case against Khaleda. Like the rest of the country, a tense situation prevails in Rajshahi.

Local BNP leaders said proper instruction has been given to their leaders and activists to be “on the field” today.

Likewise, the ruling AL is taking measures to thwart the BNP’s plans. It has ordered its grassroots leaders to be prepared to come out on the streets in large numbers today, said AL leaders.

“We have called our leaders and activists, as well as common people from all sections of society, to our demonstration programme at 10 am today in front of our local party office,” said senior BNP leader Mizanur Rahman Minu.

He also said that they have been instructed by party bosses to hold peaceful protests against Khaleda’s verdict. “But some infiltrators may slip into our gatherings and spark chaos. So, we will be careful,” he added.

To bar BNP activists from entering the city, AL senior leaders have directed the party activists to guard all entry points of the city.

“AL will not allow BNP to take the streets and spark chaos. That is why all leaders and activists of the AL and its associated bodies have been instructed to patrol every street,” Sarker added.

Mahabubor Rahman, commissioner of the Rajshahi Metropolitan Police, said they have no problem with peaceful programmes. “But if any political activist tries to create anarchy, police will handle it accordingly,” he warned.

Police have already set up checkpoints at bus stops, the railway station, and all entry points of the city. 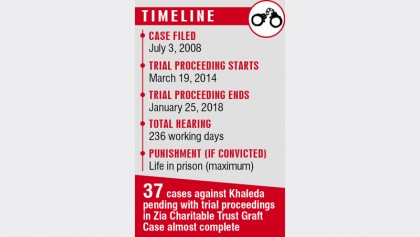 A special court in Dhaka will deliver its verdict in the much-talked- about Zia Orphanage Trust graft case, in which BNP chairperson Khaleda Zia, her son Tarique Rahman and four others are accused. On…

BTRC rejoinder on Robi's scam and our reply

Media can publish reports based on draft audit docs